The UCF national championship narrative is still alive and well, it seems.

The latest of many moves to recognize the Knights for their undefeated 2017 season came this week when the Florida House unanimously passed a bill to award the school with a special license plate. The bill -- HB 1359 -- included, among other things, a section saying "the word 'Florida'  must be stamped across the bottom of the plate in small letters, except  for the University of Central Florida specialty license plate, which  shall have '2017 National Champions' stamped across the bottom of the  plate."

Here's how the original license plate design was supposed to look: 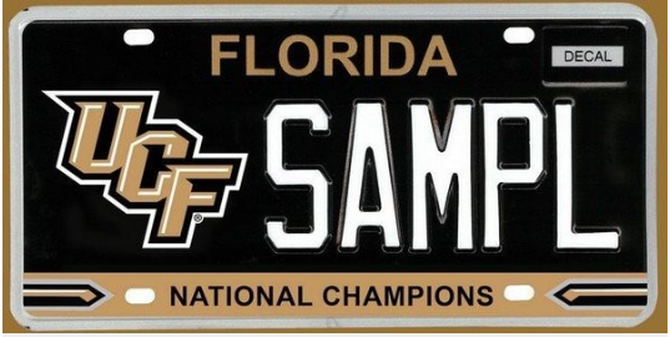 However, that has since been amended to more accurately proclaim, "Undefeated Champions."

It's an important distinction because, you know, Alabama won the national championship recognized by college football.

As for UCF, keep doing you -- especially since you compete in a  system that barely recognized you as a top-10 team, let alone playoff  worthy.  You want to hang a national championship banner? No one's stopping you. If the Governor of Florida declares you to be national champs in Florida,  or if the House thinks you deserve a license plate, more power to you.  Unofficial championships have been claimed plenty of times in the past.  And, hey, it's three months after the season ended and the Knights'  season is still a talking point.